Adventures in Boondocking: Part I

When we originally set out on this adventure we talked about the possibility of boondocking, or dry camping. This would enable us to stay in remote beautiful areas and mostly for free. While this sounded amazing it also also sounded really hard. We would need to get a generator and a solar set up and way more money to purchase all of this stuff! Everything we found online was thousands of dollars. We decided to wait, maybe later in the year we would have the opportunity to figure it out. That opportunity came in Alberta with our friends, Keith and Linda. After sharing a generator for the weekend, we realized that this was indeed going to be something we could do. However, we realized a few things… we had suspicion that our travel trailer battery was not that powerful and our heater was in fact broken, yet again. Sorry fix it dude, but it only worked one time after you “worked” on it. We have been using a space heater instead, which actually worked really well to heat the trailer. That weekend with the generator charging our battery which kept the lights and fridge running, things worked out pretty well. We were on the hunt for a generator of our own. Pretty excited, we googled deals on generators and found a great one at Home Depot. We left the campsite to run to Grande Prairie to the Home Depot. Once we arrived, you can probably guess what happened. There was no deal on generators. Why? Oh we were looking at the U.S website, not the Canadian. We still looked around at a few stores in town, but did not find anything that was a good deal. So we waited until we were able to get back to the states. We ended up getting Cabela’s to honor their online sale on generators in store and got a Champion 4375 watt for $275, which is a mad STEAL!! We have already used it enough that it has paid for itself almost twice. Perfect buy, perfect timing!

Keeping the temperature right in the trailer is by far the most challenging aspect of boondocking. When to leave the windows open and when to close them. At first we couldn’t get the AC to run but this week while staying in Colorado we figured out how to get it to come on and stay on. The power it takes to actually turn on is way more than it takes to run, so we were finally able to kick it on by turning the breakers to the microwave (which we just leave off anyway) and hot water heater off. After running the AC for about 30 minutes it cools off quickly then you can turn it all back off. Most of the time it’s perfect with the windows open and sometimes we run a small fan. The space heater we have works really well to warm up the trailer but of course we can only use that when the generator is running as well, so nights can get a bit chilly until Rodney gets up early to turn on the generator and then the heater. When we get back to Texas in October we will be looking for an additional deep cycle battery to add to the one we have and hopefully increase our power when the generator is not running. The generator was suggested to us as our first step, then add our solar system next. Because we will not be going back to renting RV spots at parks for $30 a night! Nope! This life is way better!

So, what have been the best parts of boondocking so far? Definitely the landscape that we have had the privilege to call home for a week or so. The Black Hills in South Dakota were gorgeous and peaceful and perfect. Here at Clear Water Creek Reservoir it is also gorgeous. A little less peaceful due to the fact that this is a very large “dispersed” camping area that is apparently hugely popular. The app we are using said this area was for RVs only and no tents, but I guess that is not true. There were lots of tenters as well as RVers camped here. We found a great little pocket that was off to the side, you could almost miss it….almost. We ended up with a tent pitched next to us… which I would never pitch my tent next to an RV with a generator…but oh well. We tried to be courteous with not running the generator as much but I mean hello… there are at least a dozen other tent sites not near our loud generator. The other great thing is the time we spend doing other things, reading, playing with Wyatt and just enjoying the outdoors. At RV parks if you were in for a lazy day that meant watching DVDs all day, now it means at the very least sitting outside watching Wyatt play in the dirt. Which is of course way better. Even right now, I am sitting outside writing while Wyatt is driving his dinosaur train over the fire ring rocks. Rodney is playing guitar. Pretty peaceful…. Except that there are guys in the campsite pouring new gravel over the roads which is loud… but they need it. Colorado has some awful roads ya’ll.

It is also challenging finding a good spot. We read that you should unhook your trailer somewhere and then drive into the spot to make sure it’s accessible and you fit and can turn around and get out. This also poses a challenge seeing how you can hardly find a spot to safely leave your trailer for half an hour to an hour. Our first spot in the Black Hills we were SO LUCKY no one was actually in it because later when we continued down the road it was in such bad shape that just the truck nearly got stuck, there was no way we would have been able to turn around. We would have just lived there at the end of that dirt road in the Black Hills forever. Which actually may have suited all of us just fine. That was the first place Wyatt actually cried about leaving. We all loved it there. When we were looking for a spot in Colorado we had a few to choose from. We wanted to be west of Colorado Springs near Pikes Peak and in the forest. There are a lot of opportunities to dry camp for free in Colorado and it was hard to make a decision. We are are using an app called the Ultimate Campground and you can use filters to show you the best spots on a map. The one we decided upon was called Bear Creek. Not only was the gravel road to these camp sites absolutely horrible, most of the sites were better suited for tents or maybe those campers that fit on your truck bed. Our giant rig was not going in any of these. To make matters a bit more complicated, there was no where to turn around and we had no cell service. Oh yeah, I also remembered at this time that we forgot to fill up with water, so even if we found a spot we would be inevitably driving back down that awful road with our home to go fetch water. We had to keep forging forth on the bumpy gravel road. We came across a campground that we could have turned around in, that is if the road to it wasn’t so washed out that there was no way the trailer tires wouldn’t get stuck in the ruts. There was also no one in the campground.  The road began to narrow. We drove for two hours down this road before we ended up way north and further west than we intended. Guess what? That town we came to did not have an RV park, so it was 7 p.m. and we were frustrated and tired and just wanted to relax. So we ended up driving another hour to the closest RV park for the night. The next day we found our spot more easily and next to the lake. It was meant to be. I’m sure there is a reason we were not supposed to be in that area. On the bright side, the forest was beautiful and it was a pretty two hour, bumpy drive.

For now, that is all, but stay tuned for more – Adventures in Boondocking! And if you didn’t read that like a narrator in a DC comic movie, then we can’t be friends….

View from our spot in the Black Hills of South Dakota.

Looking down at our spot at the lake in Colorado.

A panorama of our trailer in the Black Hills.

The view while I work. 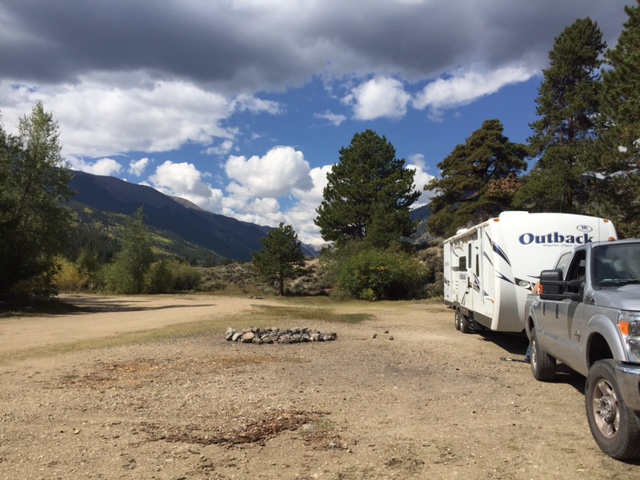 Packed up and headed out!