And Now For Something Completely Different!

So, it’s been a hot minute or two since my last post and boy has a lot happened and changed since then. Rodney played a packed show at the Tobin Center at the beginning of January and it was so great we are still basking in that after show glow. I was so nervous, why I have no idea because he was as calm and cool as a cucumber… why do we say that? Are cucumbers a calm vegetable? Are tomatoes full of anxiety? Are eggplants natural nervous Nellys?  Maybe this is why they offer cucumber water at spas. Anyway, Rodney’s show was fantastic and his tour this year will look a little different, with fewer shows that will be in a theater near you! He will also be focusing on a few new gospel albums this year. One thing we have learned in this wild year of travel is that you must trust in God. You must actually listen to God. If you are feeling led or called to something, you should probably do that and stop making opposite plans that makes God laugh and want to squeeze your face and say, Oh my child, you’re so cute. If you are interested in following along with the music you can catch up with Rodney at RLHayden.com

More on what God has in store for our family life… right now! We spent a lot of time, more time than we spend deliberating anything, trying to figure out what our year of travel would look like. It seemed like we were chasing our tail. So we went to the beach. If you are like me and the rest of my family, the beach is place to gain clarity and have nice chats with God on the beach, or you can yell and shake your fists if you like, in the winter there’s not many people on the beach and the waves are so loud anyway no one will hear you. We love Port Aransas, Rodney and I both grew up going to that beach as kids and it made our hearts happy to see Wyatt enjoying the same places. His sweet heart was broken for the city after seeing the damage done by the hurricane. He would say, I don’t like that the hurricane messed up our city and beach. We made sure to point out all the helpers, who were there making it better. He did his part too, Captain Planet Jr. helped to clean the beach. That gave him a great sense of pride. We seriously considered calling Port A our home base for the year. And then, what’s that saying, you make plans and then God and the universe laugh at you. There were other things in the works for us that were just not visible to us yet. I’m not sure if I ever mentioned our long-term goal in the blog at any point, I feel like I did…but if not, this is what it is. Eventually, we plan to buy some land, somewhere, and build ourselves a little self sufficient farm. We wanted animals, a giant garden, a cute little house, and most of all to be completely self-reliant. I have always had this feeling, so deep in my soul, that I just need to have my hands in the dirt. I need to be a part of the land. So this long term plan of ours, while inching closer, was something that I prayed about often and was already written on my heart a long time ago. About the time we decided we would need to find a home base for the year, because touring was going to look different for Rodney, we came across something that was too good to be true. A small Ranch in Boerne was looking for someone or a couple to live on the ranch and care for the animals. All the things listed were basically my chores growing up, so we were like, how weird that we found this and how just…. how weird. So we called. Then we drove on over. When they said, you can even plant a huge garden or do whatever. We were sold. First of all ya’ll, there are sweet horses. Seven, spunky sweet horses and donkeys and chickens and goats. All the things that we wanted Wyatt to understand responsiblity and care for the land and animals was here. While our dream farm is still out there somewhere, this beautiful place is going to be our mini dream practice farm. That sounds totally weird right? I think we will be here for a long time. I’m excited about the possibilities that this place offers. We moved in about two weeks ago and we have busy ever since.

Wyatt LOVES the animals, so much so I’m scared sometimes he is going to turn into Elmira from Tiny Toons. If you don’t get that reference…. maybe google it, because I can’t think of anything else. He is adjusting super well. He even said, “This house doesn’t shake when I jump in it! I like it!” He has his own little chores, he feeds the cats and helps feed the goats and donkeys. He is even becoming an expert chicken herder. We are gearing up to plant our garden and Wyatt is super excited about it. He is so ready for plants to go in the ground, he cried at home depot the other day because we didn’t buy any yet. We had to explain that we’re not ready yet, we have to plan, and prep the ground for planting etc. It was also a funny surprise to see how opinionated he is over interior decorating. I would put up a picture or painting and he would argue with me on where it should really go. Mostly he wants things at his eye level, but he had strong feelings on where all the family photos went.

This new chapter is making out to be a very adventerous one in a very different way than last year. So the blog will be changing from travel focus to more of a homesteading focus. I’m also excited about another new venture of mine. I will be working on writing a cookbook this year as well as another book. I will also be offering cooked caserole type dishes as well as deserts to be deliverd in the Boerne area. AND once the garden gets going I hope to be taking some plantings as well as canned and baked goodies to the Farmers Market. We shall see if that ends up being in the cards.

Here we are after our first morning of feeding the animals at 7 a.m! 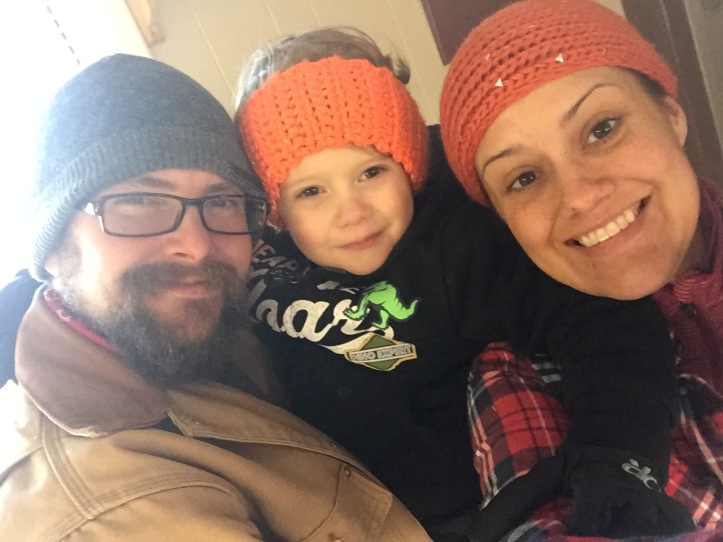