So we needed to hit the refresh button on last week. So we hooked up to our turtle shell and took off for New Braunfels. Landa RV Park in our sites. All else be damned. I called the office at Landa RV Park to book our site – great news, RVers – all sites are only $20 during the winter! The woman on the phone asked me which direction we were coming from and when I said San Antonio she said, oh well you won’t have to worry about the bridge. Ok great, I said, not really thinking much about it.

Fast forward the 30 minutes or so to New Braunfels… I plug in the address to the RV Park to Google maps… it takes us straight to the bridge we were not supposed to worry about. We see the bridge ahead too late to turn the trailer around. It’s 11 feet 8 inches of clearance, not to mention BARELY wide enough for two vehicles to pass through at the same time. OH MY GOSH! Why did we come this way? We knew this bridge was here!! Why were we blindly following google maps? AHHHHHH!!!!

I rolled down the window and stuck my head out to watch as Rodney slowly drove us closer to the bridge. I think we are going to make it! Thank heavens, we did! We had maybe 9-10 inches of clearance at the top. The traffic on the other side of the road stopped, wide eyed, mouths agape. Whew!

Two more turns and we arrived a few minutes after our close brush with disaster. We got a great site along the river and for a day we were the only ones there!

Then it was time. Time to dump the tanks! This was the first time we were actually going to dump the tanks. We had hooked up once before, but because we realized they needed to be almost full to dump we were not able to. Now that we were in the trailer a little longer and with no sewer hook up, it was finally time to dump. So… out came the gloves and hoses. Now, we are at a tad of a disadvantage since the owners manual does a crappy job at telling which valve pull and tank is black and which is grey. We have 3 valve pulls and 2 different tank hose hookups. All of them are labeled grey. With the power of deduction we decided the front tank, since it was under (kind of) where the kitchen is, must be the kitchen grey water. The tank hook up in the back was probably for the black and the shower grey water. How do you figure out which valve pull is black and which is grey? You can actually buy CLEAR sewer hoses. Which sounds disgusting but are useful in two ways – 1. You have no idea which valve is which and 2. you can see when it’s done and the flush water runs clear. We DO NOT have a clear hose. So we pulled the right one first. The woosh that followed was quite impressive. The amount of water that was in there was kind of crazy. But it all went out and through the hose, so we pulled the valve pull on the left. Another woosh, but this time with more stink. The one on the left must be the black water. We are lucky to have an outside water hose hookup to flush out the black tank. So we did that. Success! One more tank to drain. So we disconnected that hose and attached the extra piece that would reach all the way to the second tank. This looked easy, so I said here I can attach it to the hook up! I went to open the drain. I barely cracked it and of course it started spraying!! Quickly I re-attached the lid. Panicked. Then we realized somehow that the valve pull was pulled out just the tiniest bit. So we fixed that luckily without any more stinky water spraying out all over the place. Rookie mistake. Always make sure the valves are closed. First dump a success!

So what else? Both Rodney and Wyatt fell in the river trying to retrieve one of Wyatt’s toys he dropped while they were fishing. I was not there at the time. I had run into town. Not that it makes any difference. They had the best time though. When I came home they both properly smelled like fishermen.

RV TIP: We knew we needed to get a dehumidifier… we could feel the dampness every morning. Let me tell you this! If you get an RV, go immediately and buy a dehumidifier. It makes a world of difference. AND it will save your RV. It’s noisy, but worth it.

Let me leave you today with the cherry on top of the sundae. We were doing laundry today at the RV park laundromat. I left to go check on the load in the dryer and put another one in etc. When I got there I realized I had left all the quarters in the trailer. So I called Rodney to bring them to me. He and Rodney walked up and brought quarters and helped me carry back some of the clean laundry. When we got to the trailer we unlocked it, walked in, put down the laundry basket and then we all walked back out. Closed the door. Then, we went to go back in. It was locked. Where was the key? In the trailer. Where was the phone? In the trailer. Super. Awesome.

If you know trailers, you know that all the windows are tiny. And most only crank open like a flap not even a real window. But our saving grace was one small open window and our 3 year old son. It went something like this:

Me: Wyatt, you want to crawl in the window and go open the door for mommy and daddy? It will be so fun!

Rodney: You will be the hero of the day!

We go to pick him up to put him through the window. He freaks out. He doesn’t want anything to do with being shoved into the window. I mean, why would he? Not fun. By now we have attracted the neighbors. They are offering a little girl from the next RV over. A little girl who is not theirs mind you.

Rodney: Wyatt, you can have a big ice cream cone if you crawl in the window and open the door for us.

Me: Look Wyatt the door is locked!! Oh no! The Ice cream is inside but we can get it!! You have to go in the window and open the door if we are going to get ice cream!!

Wyatt: (with pride and determination) Ok! Go through the window!

Rodney: You are going to be the Hero!

Amazingly, he went in. He opened the door. He didn’t get hurt. He didn’t cry. In fact he was so proud of himself he was beaming. And of course we was handsomely rewarded with mint chocolate chip ice cream with two different types of sprinkles. 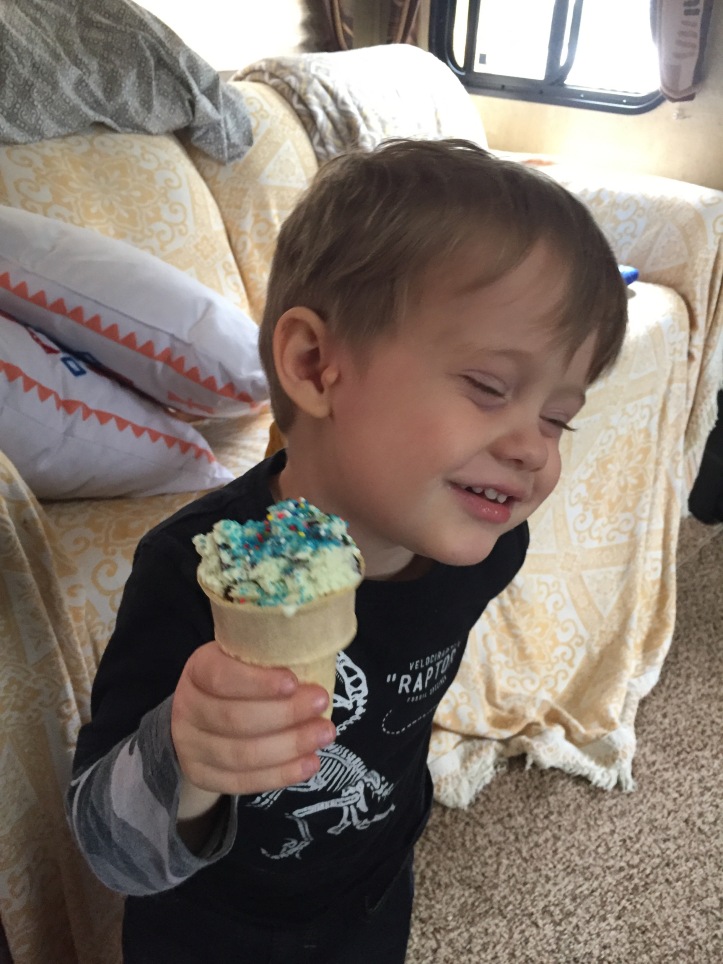 Wyatt with his reward. That window in the background is the one he crawled through!