Love for Family, a Town, and a Potty

You know when you’ve waited a long time for something to happen and then it does and then you don’t want to say anything because you’re afraid you’ll jinx it? Well, I think I may be safe to announce the fact that the small human Rodney and I created roughly 42 months ago has decided to use the potty on a regular basis. As in daily. As in, one accident in two weeks!!! Now, if you have been following along you know how stressed out I was! But then one day a little over two weeks ago he just stopped going in his diaper and asked to use the potty. All on his own! Like he was the inventor of this idea! We did help him out in minimizing the accidents by putting pull-ups on when we drove to Colorado and still at night because I’m scared! But he did successfully have two public outings where we had considerably long drives into town wearing underwear! A few nights ago he even woke me up to potty… I totally told him to go in his pull-up because otherwise I had to carry him down a ladder, half asleep, in the dark, from the loft to the potty. He told me no! So I had to wake up. But I’m so proud! Is that not the most hilarious Mark of parenthood? To be proud of a child for using the potty?!

This new found independence of his has not come without hilarity. He has insisted on everyone in the house seeing his poop deposits. He was fascinated for two days with some bright green poop that can only be explained by too many Fruit Loops! Fascinated to the point he compared the color to every thing green…In public. Today we visited a Wolf Sanctuary and he told our friend who was showing us around that the wolves pee a long time just like he does. We have had to use two port-a-pottys and pee on the side of the road a few times. So this has been a very eventful first two weeks or so in using the potty.

In other news… not related to my offsprings use of a toilet… thanks for hanging in there by the way through that excitement… We all got to spend quality time with my parents. Especially me! My dad and I smoked ribs and sausage for an event in Westcliffe that he BBQed for. He took me through the process step by step. How to keep the fire at the right temperature, how long to smoke them, when to wrap them up. We seasoned and smoked 60 racks of ribs together! It was a lot of fun and only the beginning of my BBQ education. My dad is known for his BBQ skills and he is utilizing those in Westcliffe with a small BBQ operation with my mom. B&B BBQ. When we eventually get moved up here I will be helping out with the BBQ all the time. So I’m starting to learn now!

It’s also been uplifting to just spend two weeks in the same house as my mom! Sometimes you just need to spend time standing next to her in the kitchen or watching a movie. It seriously makes me feel better and I miss her so bad when we are gone for long stretches. 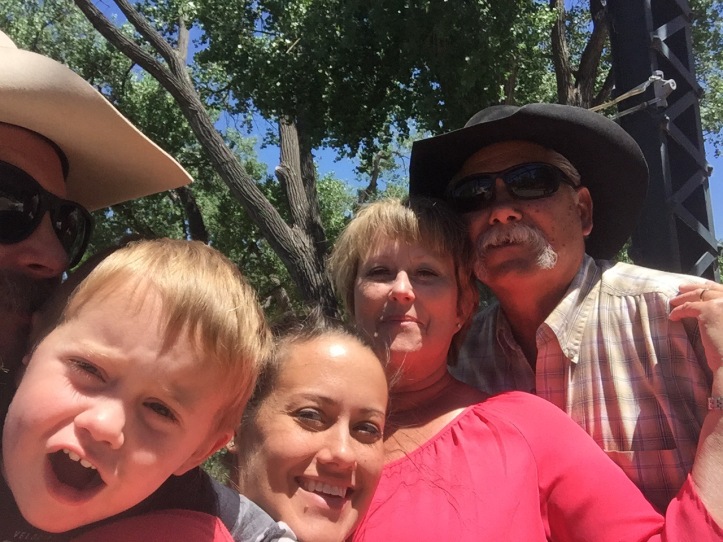 We had a few fantastic hikes that did not include Wyatt… he was just not interested in hiking long distances this time. Short walks yes. Hikes nope! He wanted to be carried, which is not easy when you’re not necessarily hiking a trail. So he had to stay behind with his May-May.

I did get to create a cutting board with my dad to replace that ugly plastic thing in our RV that covers up the sink… major upgrade! 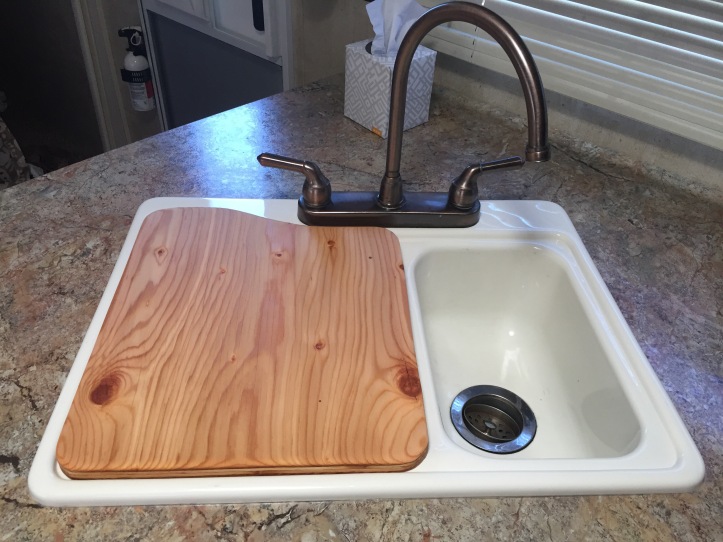 One thing this trip did produce was a greater love for this little town. We had drive into town for no real reason but ended up at this public park area facing the Sangres and all along the walking trail were illustrated pages of “we’re going on a bear hunt”. Such a cool detail that gets kids excited about going on a little walk. We also visited another one of their parks with a playground and it was so well taken care of and had so many things to climb on and slide on and twirl and swing and spin, Wyatt spent hours there! The grass was even perfect, and begged to be played on! We just really love this town!! You should plan a visit! 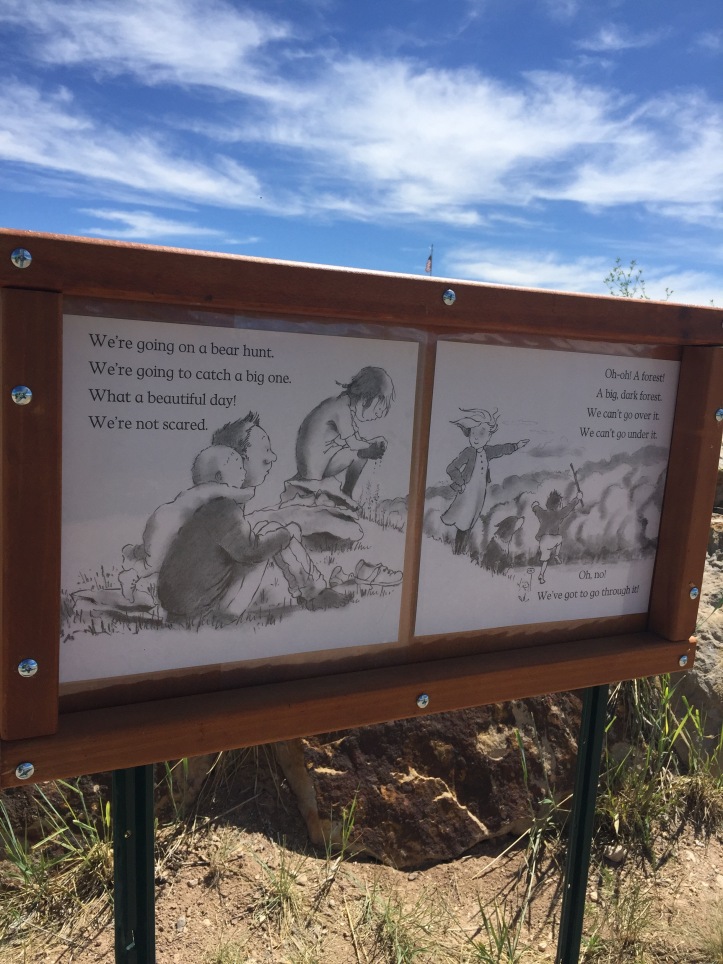 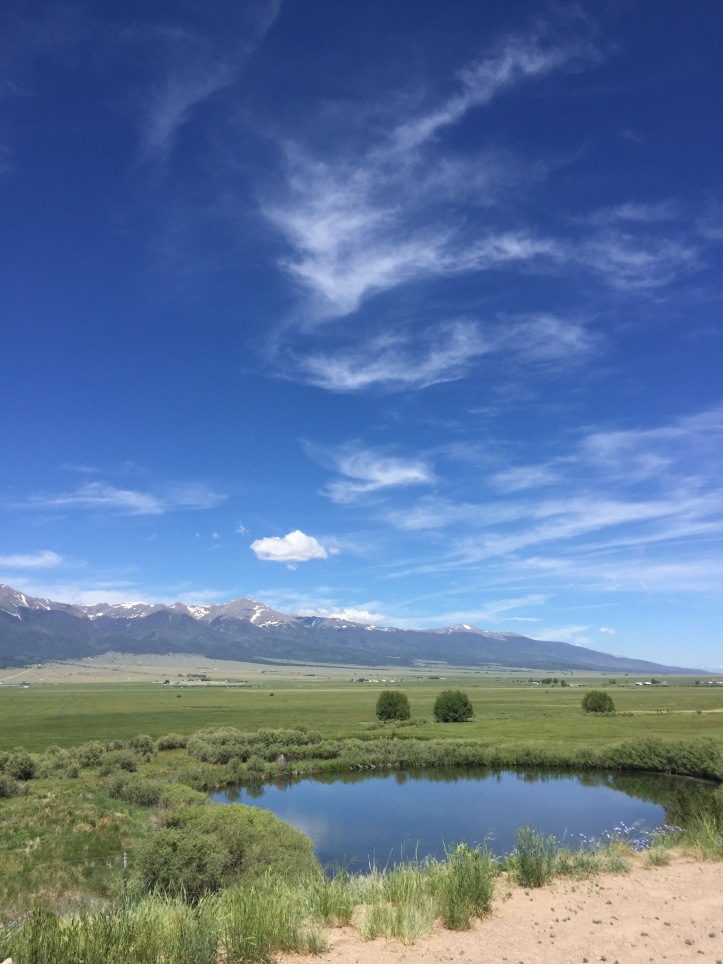 This is probably not everything I intended to talk about… but now it’s late and I’m tired and I can’t remember anymore. I’m sure you can relate! Next week look forward to a video blog… not sure about what yet, but it’s coming!