On the Road Again…

When we left Utah July 10, we were headed to Texas for a few shows and to see family. This already seems like it happened 2 years ago. We left Texas for Montana July 31st. Even though that was only a week and a day ago it seems like a month. I have no idea how time is passing so…slowly? It seems like so much happens each day that each day feels longer than it should, I think that’s it.

When we hit the road a week ago we made excellent time out of Texas. Wyatt was traveling like a total pro. The trailer was pulling like a dream, thanks to the new tires. We were flying into north Texas.  We made it into Amarillo well before dark. We made it to Colorado the next day to my parents house and even had time to run into the next town to pick up medicine from the Wal-Mart pharmacy. After dinner and breakfast with the parents we were on our way north again. We weren’t taking extra time just in case we ran into trouble somewhere. The third night we were just on the other side of the Colorado and Wyoming border and we stayed at Terry’s Bison Ranch.

Terry’s Bison Ranch – This was a very interesting place on the southern outskirts of Cheyenne. This 27,500 acre ranch has been around for over 100 years and has played host to President Roosevelt, General “Blackjack” Pershing and much later part of Dances With Wolves was filmed here! There is of course much more history to the place, but I was pretty excited about those. You can take a train ride through a small part of the operation and hand feed bison from the train. Wyatt loved this. Who am I kidding, I loved this!! The bull we saw, Dave, is the son of Tinker, which was the bull in the movie Dances With Wolves. The Ranch has the second largest bison operation in the U.S – second only to, you guessed it, Ted Turner. While parts of the park were pretty run down, I would recommend it and go back for sure. The scenery and animals are worth the stop over. 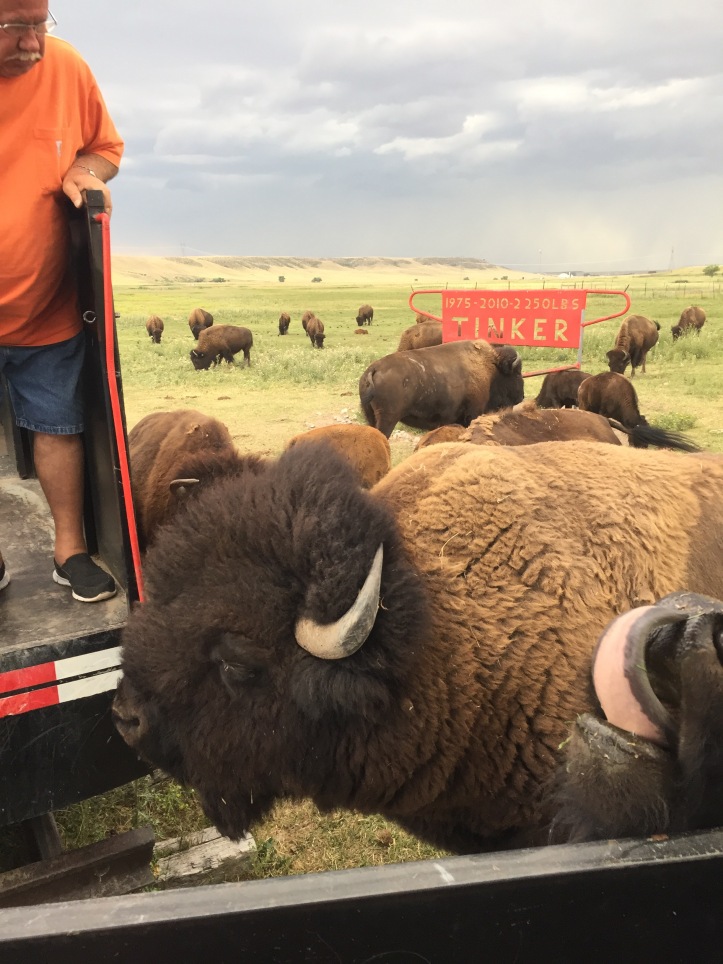 The next day we traveled through the rolling grass lands of Wyoming to Kaycee, home of Chris LeDoux. Talk about a small town. We walked from one end to the other in a very short time. It was a great experience to get to see the Memorial Park for Chris. It was a very nice city park with a beautiful statue in the center. His boot prints even enter the park on the side walk. If you are ever passing through, we would highly recommend stopping by and even staying in the RV park along the Powder River. 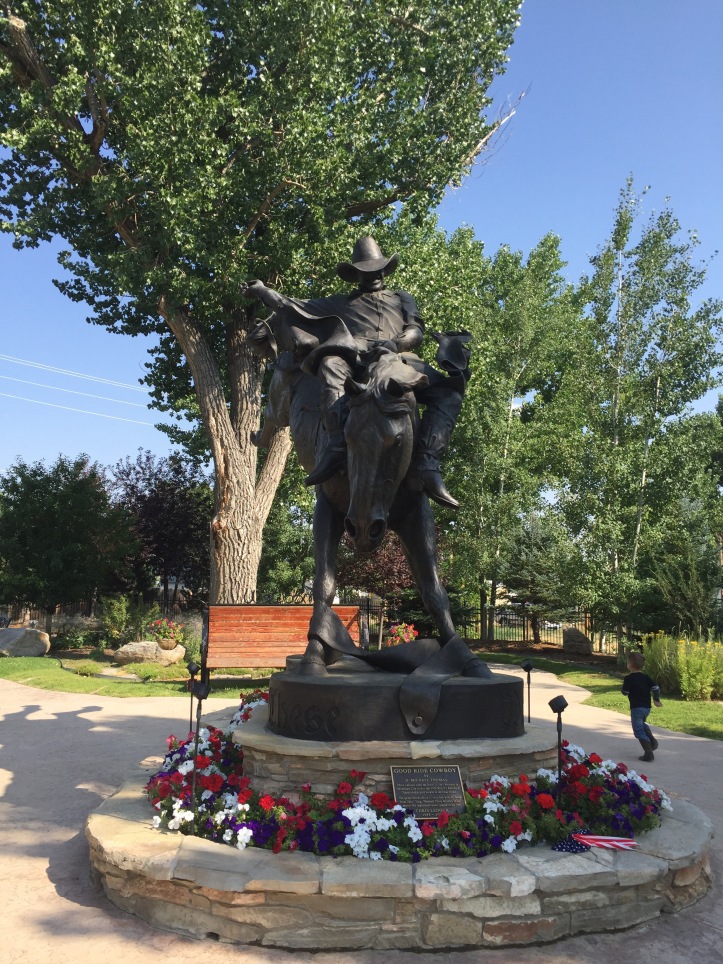 Our next stop ended up being the Battle of Little Bighorn National Monument. We were lucky enough to spend an entire afternoon here until they closed. It was a moving experience. It was also interesting to explain to Wyatt what was going on. At the very first stop when we got out of the truck he was a bit rambunctious. So I explained to him that this was a battlefield where many men lost their lives and that the white and red markers were grave markers where people had died. (We do not sugar coat things in this house). He looked at me and said, “Oh no! People stabbed them in the stomach and cut off their ears and hands and arms and legs?” Rodney and I just stared at each other… where in the world did he get that from… So we just said, “I don’t know how they died buddy.” And you know what makes this story crazy? Not two minutes later we put on the audio tour and it said that some of the US soldiers had ears cut off and some were dismembered. Freaky. No really… someone explain that level of weird. One thing I couldn’t help but think about was how scared the US soldiers must have been- because surely they knew coming into this battle that is was not going to end well. Just one look at the landscape should tell you that the US was totally out of its element. It was truly a remarkable experience to stand there and look out over these beautiful hills and imagine the battle. The signage and audio tours were excellent companions to the experience.  This should be a must see on everyone’s list. 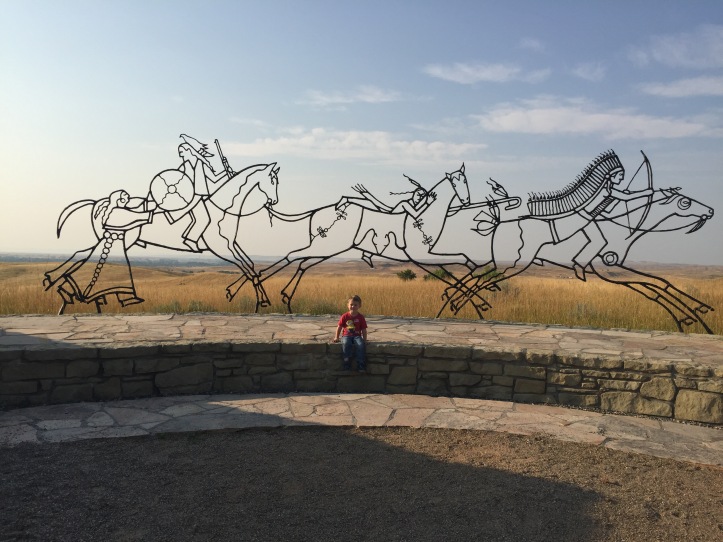 The next night we made it to Bozeman. Through all of the driving it seemed we rarely saw anyone on the road. Nearly all of Wyoming and Montana that we drove through was pretty desolate. Bozeman, though, was a nice little town and very pretty. We made some great new friends, Jason and Jackie, who have two kids that Wyatt loved getting to play with. Rodney had a great show at Live From The Divide, which was a great venue! We left the next morning to head to Idaho and made it to nearly the border. As we left Bozeman, it became increasingly hazy from the fires in northern Montana. I’m sure if it weren’t so hazy the views would have been even more fantastic. 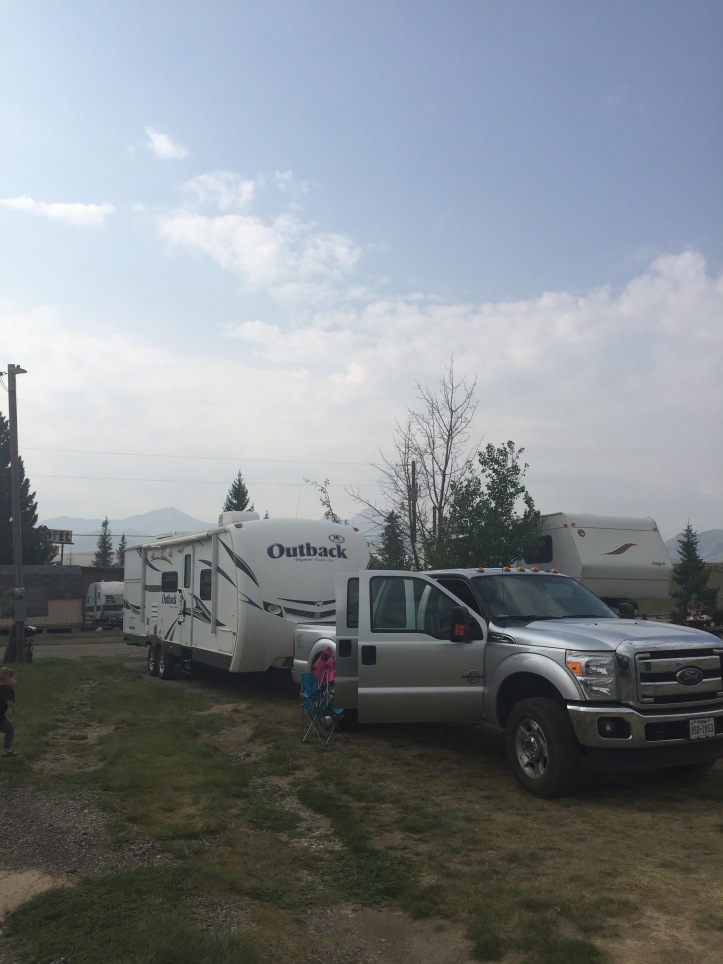 After our weird night in southern Montana (see facebook post for that story). We got an early start to head to Craters of the Moon National Park. And here we are, post hail storm in the middle of nowhere. I will tell you this, Idaho so far is very beautiful. Rodney’s favorite thing about Idaho, Montana and Wyoming is the lack of people. Each state has less people living in it than in the entire city of San Antonio. This definitely gives way to some thoughtful driving through beautiful landscapes, since you rarely see other people. 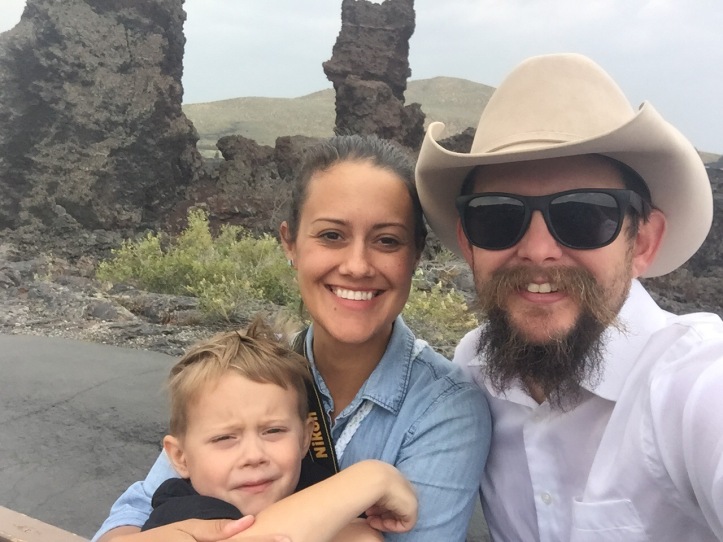 Tomorrow we move on again. Heading onward to the next show in the next town. I am so excited about getting to Canada, I can hardly wait.

Until next time… Happy trails.